Gemini 11 took astronauts Dick Gordon and Pete Conrad into space, setting an altitude record of 850 miles (1,400 kilometers). This Gemini mission gave us the first view of Earth as a sphere, and was also the first American flight to have a computer-controlled reentry. 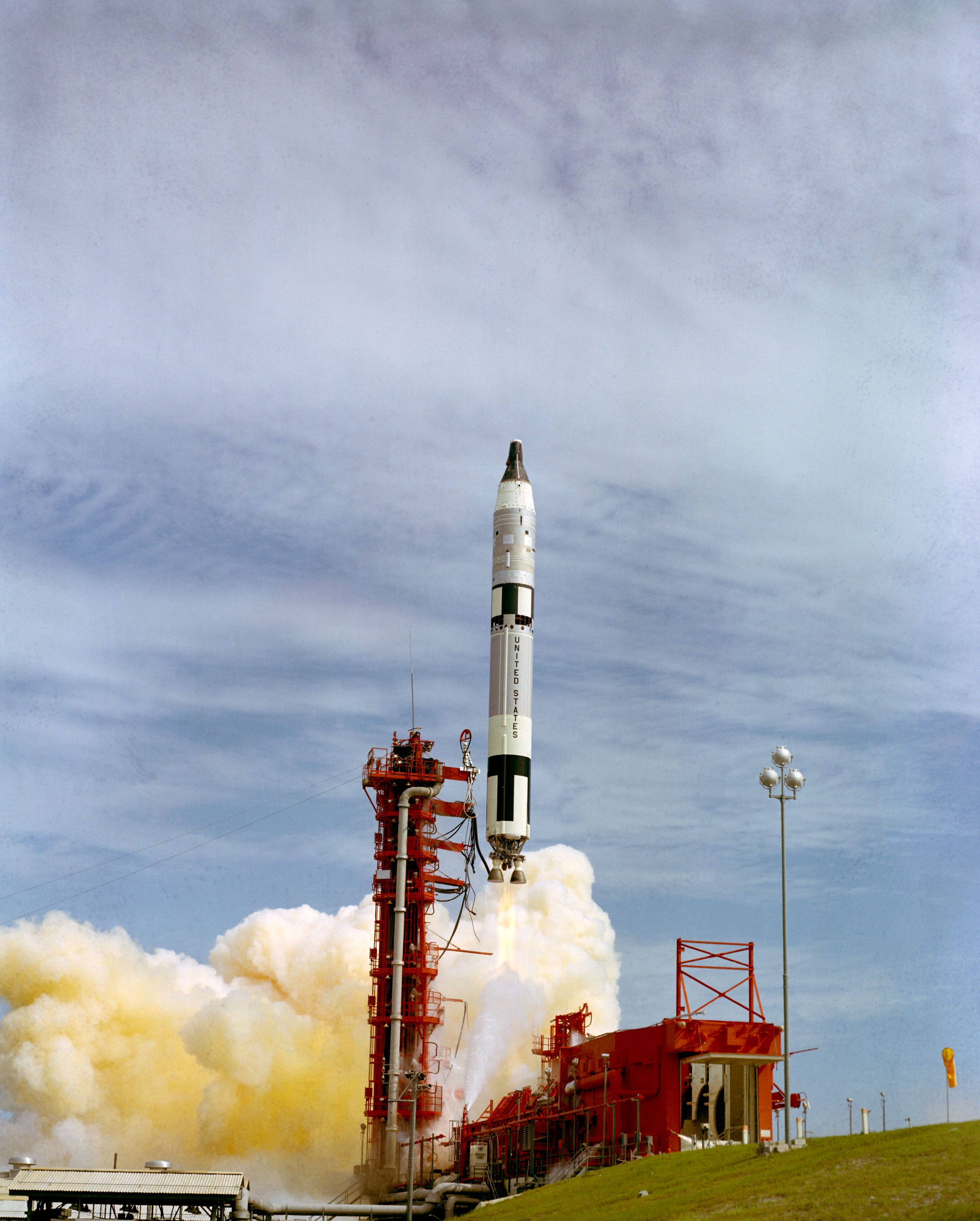 Project Gemini bridged the gap between the Mercury program, the first project to put an astronaut in space, and the Apollo program, which landed humans on the moon. After two uncrewed test flights in 1964, ten crewed Gemini missions took place in 1965-66. Each of the crewed missions had a two-man crew, which inspired the name of the project. Gemini is the name of the constellation containing twin stars, Castor and Pollux.

The main goals of the Gemini project were developed to match the tasks that might come up on a trip to the moon. The official objectives of the program were:

The design for the Gemini capsule grew out of the basic tried and tested design of the Mercury capsules. However, the complexity of the new project called for two astronauts and many technological advances. The Gemini capsule had to hold two astronauts for flights lasting as long as two weeks, compared to the longest Mercury flight of 34 hours and 20 minutes. In addition, the capsule had to offer accessible storage for food and scientific equipment, and had to be maneuverable both in space and during reentry so the capsule could dock with another spacecraft in orbit and land in a specific place. As a result, the Gemini capsule was launched with a service module that carried supplies and some life support. The Gemini capsule also featured thrusters around the nose of the capsule that made it possible for the astronauts to fly around a target. Gemini 11 disconnects the tether from the Agena target vehicle used for docking practice in space.

During the Gemini 11 mission, astronauts Dick Gordon and Pete Conrad spent three days in space, practicing the skills needed for the Apollo moon missions and carrying out the twelve experiments on board. In the first orbit of Gemini 11, the astronauts docked the capsule with the Agena, another orbiting craft. The astronauts used the Agena's propulsion system and fuel to boost the Gemini capsule into a higher orbit. Later in the flight, the astronauts undocked Gemini from Agena, and then tried to spin the two crafts which were then only connected by a tether line. The spinning experiment was designed to see if the rotation of the crafts could simulate a gravitational force.

Gordon also had two EVAs (Extravehicular Activities, also known as trips outside the capsule) during the mission, once on a 33-minute spacewalk and once standing in an open capsule hatch for about two hours. He used the time outside the capsule to take photos of Earth and the stars. As with all Gemini flights, the health of the astronauts was continuously monitored and relayed back to Earth during the mission. Underneath their flight suits, the astronauts wore a biosensor suit that measured blood pressure, body temperature, respiration and heart rate. Film recorded during the flight was used for study of astronaut behavior in microgravity. However, only one of the twelve Gemini experiments addressed human life in space. The experiment examined the effects of radiation and microgravity on isolated human blood cells.

The inside of the Gemini capsule is very small—so small that the astronauts had to put on their space suits and open the capsule hatch if they wanted to stand up. While in space, they ate three freeze-dried meals a day, went to the bathroom using hoses and bags, and cleaned house just by opening the hatch—everything that wasn't attached was sucked out into space! 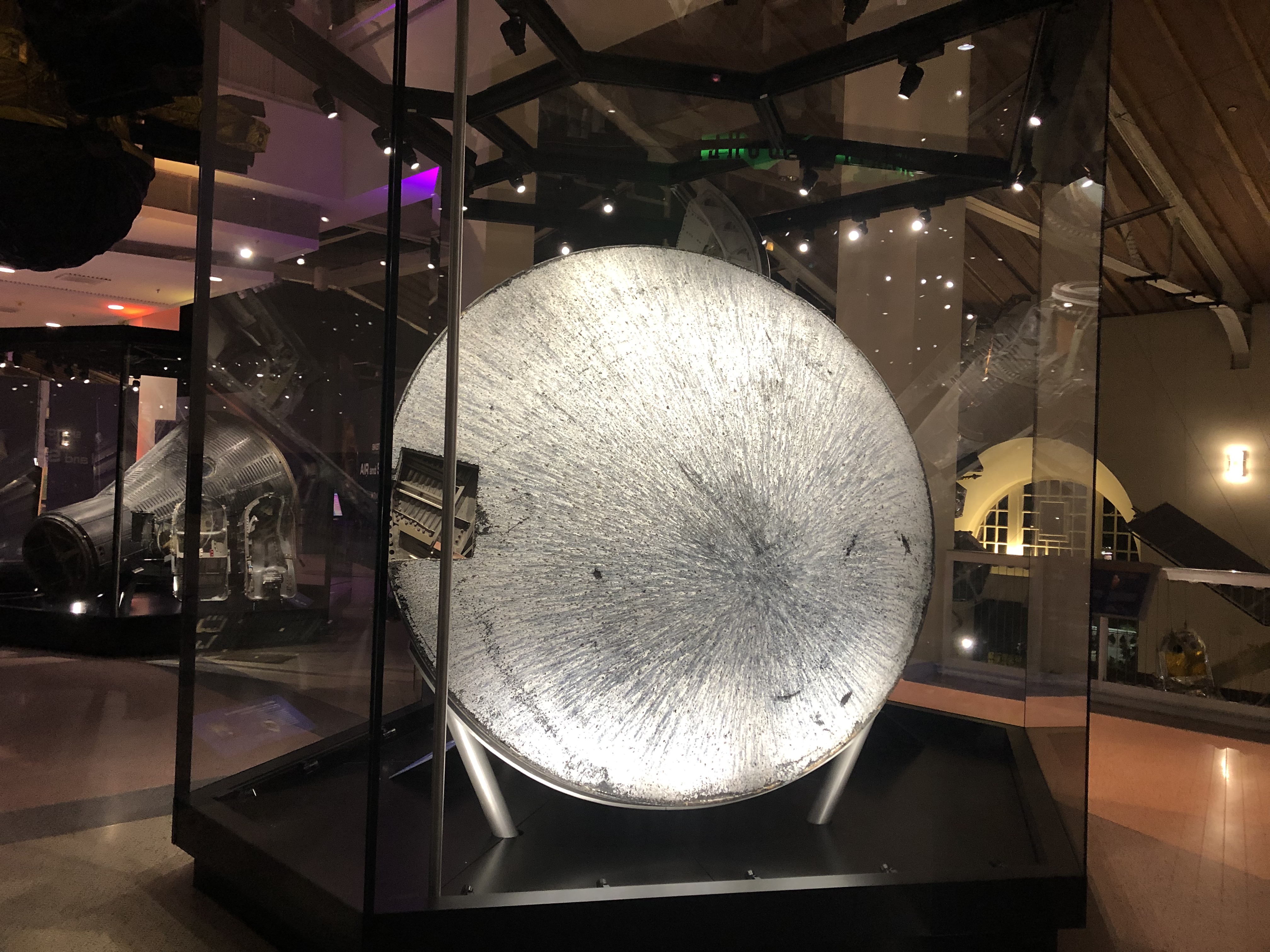 The Gemini 11 on display in the Air and Space Gallery is the actual capsule that went out into space in September 1966, on loan to us from the National Air and Space Museum, Smithsonian Institution.

On the bottom of the craft, you can see the pattern that was burned into the heat shield when the capsule reentered the Earth's atmosphere. During reentry, friction with the atmosphere heated the shield, made of fiberglass and resin, up to 3,500°F (1,900°C). The outer surface vaporized from a solid to a gas. As it boiled away, it carried away heat. The black pattern on the heat shield is made of the carbon residue left behind. The pattern isn't centered on the heat shield because the capsule came into the atmosphere at an angle. Entering at an angle gave the capsule some lift, like a wing. The commander could adjust the reentry flight path if needed.

Materials: Capsule hull is titanium coated in fiberglass insulation, covered with shingles of nickel-steel alloy. The rounded heat shield on the base is made of fiberglass and a strong plastic called phenolic resin.

Gemini: Bridge to the Moon

This NASA site puts the entire Gemini program into context, showing how it defined and tested the skills needed to go to the moon in the 1960s and 1970s.

Find crew bios and a timeline of Gemini 11 events, including pre-launch planning and activities, on this page which also includes a reference list.