The flight of this Mercury-Redstone 2 tested the rocket, the capsule and the ability to work in space and return safely, in preparation for the first American astronaut's journey into space. Mercury-Redstone 2 carried a chimpanzee named Ham and helped to confirm that humans could safely make the trip.

As part of the space race against the Soviet Union, the Project Mercury program (1958-1963) was designed to put an American astronaut into orbit around the Earth and return him safely. The program also tested how well humans could function in the unknown environment of space. But before humans could be sent out, NASA needed to make sure that they could be kept safe from micrometeoroids, radiation, noise, vibration, acceleration forces, microgravity and the vacuum of space. In addition, medical experts were unsure if humans could handle being isolated and confined in a space as small as the inside of the space capsule. 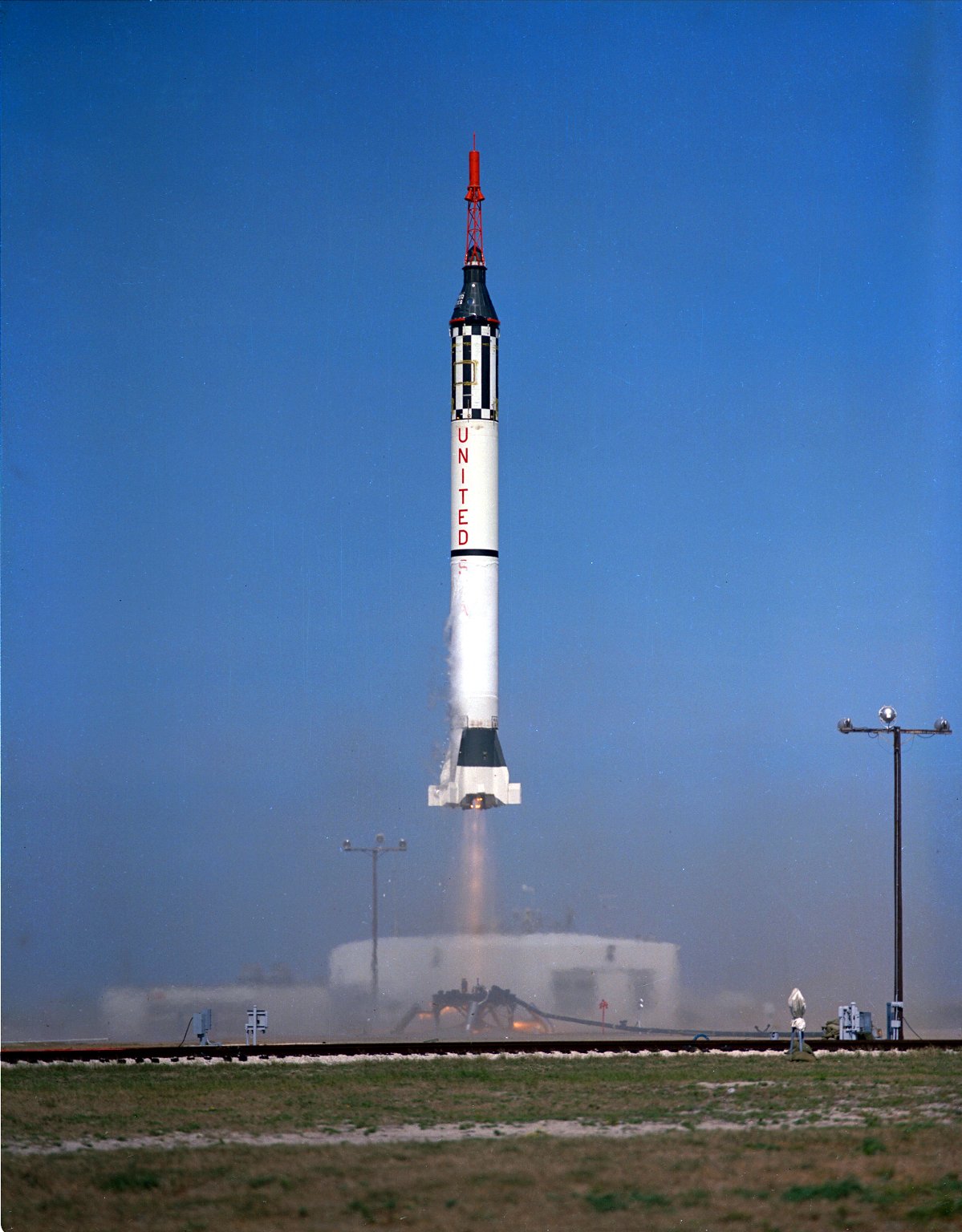 The Mercury-Redstone 2 flight tested the rocket and capsule, as well as the ability to work in space and return safely to Earth. Once the rocket and capsule design features selected for the Mercury missions were performing reliably, a chimpanzee named HAM was chosen from a colony of six "astrochimps" to test the environmental control systems inside the Mercury capsule. Researchers sent chimpanzees into space because chimps' organ and skeletal structures are similar to ours, and chimps can be trained.

The MR-2 flight showed that HAM could concentrate and work in flight. Through launch, more than six minutes of weightlessness, and reentry, he moved levers in response to flashing lights, just as he had been taught in the laboratory. Ham's response times in space were as good as on Earth.

The success of HAM's flight paved the way for the first American astronaut, Alan Shepherd, to go into sub-orbital space on May 5th, 1961. Another chimp, Enos, tested the first orbiting Mercury capsule on November 29th, 1961. On February 20th, 1962, John Glenn became the first American to orbit the Earth. 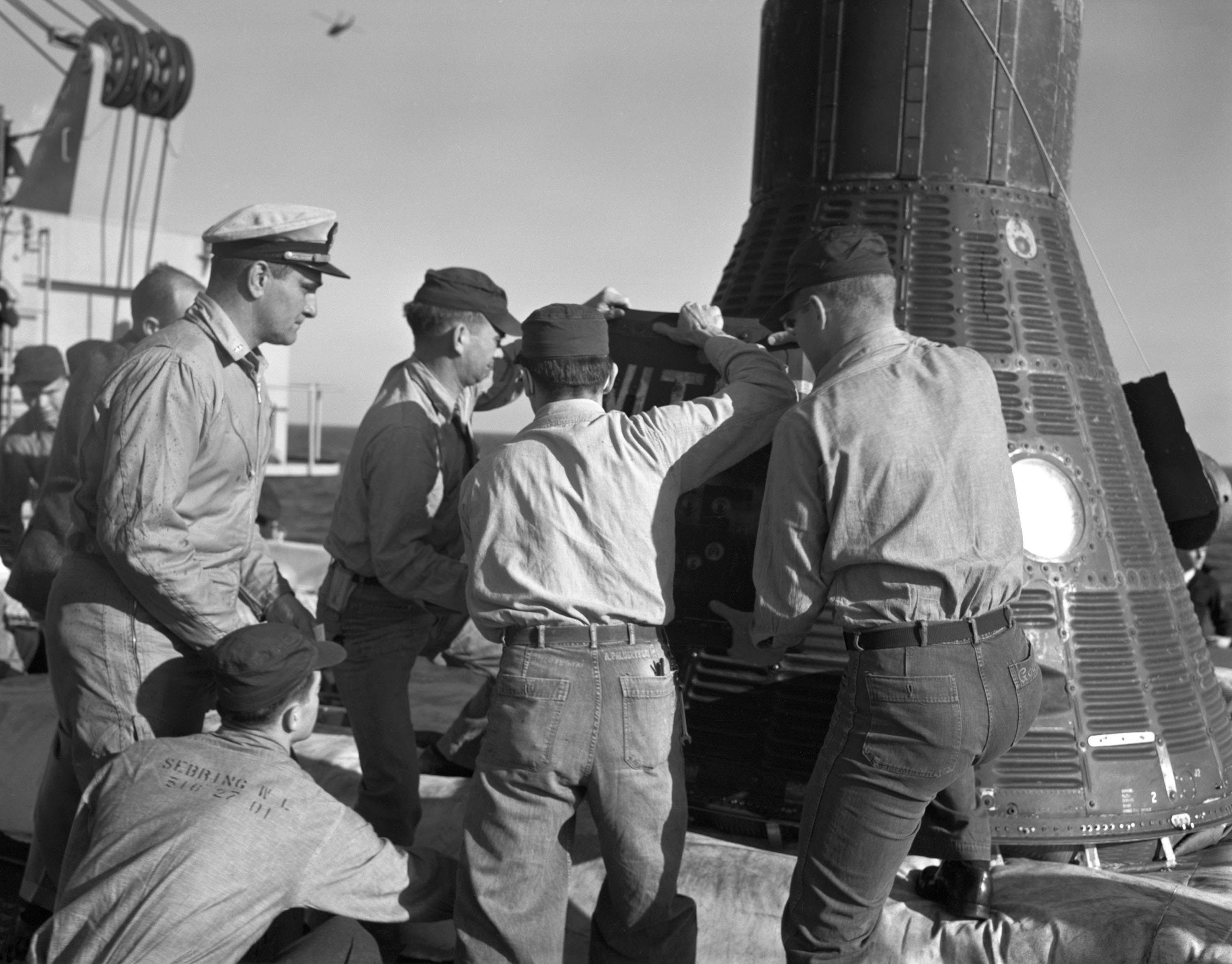 Six naval destroyers and a landing ship dock, the U.S.S. Donner, with three helicopters on board were waiting to pick up the capsule when it landed in the Atlantic. Unfortunately, they were waiting in the wrong place. Because the capsule went faster and higher than expected, it landed 60 miles away from the nearest ship. Just in case of such an event, four surveillance aircraft were ready to search for the capsule.

Half an hour after landing, a plane spotted the capsule. Helicopters from the U.S.S. Donner were sent to collect it, but it took 2 hours and 40 minutes until a helicopter managed to lift the capsule out of the water. During that time the heat shield and landing bag, already damaged on landing, were further ripped about by the waves. The heat shield tore free and sank before recovery, leaving only the badly damaged landing bag.

Once back on the ship, Ham was finally taken out of the capsule. Physical examination showed him to be in good condition, despite the fact that his 16 minute flight into space had extended to a rescue mission lasting just under four hours.

On all other aspects the flight of MR-2 was a great success. The heat shield/landing bag mechanism was quickly redesigned to be able to withstand stronger impacts before Alan Shepherd's Mercury flight three months later. The Mercury-Redstone 2 capsule with a chimpanzee flight couch on display at the Science Center. "Astrochimps" like Ham would be strapped inside the couch, which was placed inside the capsule during flight.

The MR-2 capsule on display at the Science Center is the actual capsule that went into space with HAM on board. Inside the space capsule, you can even see Ham's couch. Outside the capsule, you can see an identical couch used by another chimpanzee, Enos.

After the MR-2 capsule returned from its trip to space, the Navy used it to practice helping a person out of the capsule and retrieving the capsule from the ocean. These practice missions helped the teams prepare for later Mercury missions, many of which were manned by human astronauts. If you look closely at the nose of the capsule we have on display, you'll see yellow paintings that look like hieroglyphs (see photos at left). The paintings were done by the rescue team members to keep a record of what happened on each practice mission.

The MR-2 capsule is on loan from the National Air and Space Museum, Smithsonian Institution.

Internal Dimensions: 40 square feet (3.7 square meters) - "about the size of a coffin"

Capsule control: Mercury missions did not require sophisticated control and the basic maneuvers for sub-orbital and orbital flights could be controlled automatically. Many of the instruments inside the capsule were from airplane cockpits.

Materials: Hull made from titanium 0.01 inches (0.3 millimeters) thick, blanketed by fiberglass insulation and covered with blackened heat radiating shingles. On the conical sides, shingles are made of a nickel-steel alloy. The cylindrical nose needed protection for higher temperatures, so shingles were made of beryllium. Beryllium heat shield (lost on recovery) to absorb heat on reentry. Plasticized fabric landing bag.

Manufacturer: McDonnell Aircraft Corporation of St. Louis in conjunction with the Space Task Group, formed by NASA and operating out of Langley, Virginia.

Could Ham see out of the capsule? No, but he experienced microgravity. A window was added to later capsule designs so the astronauts could look out. 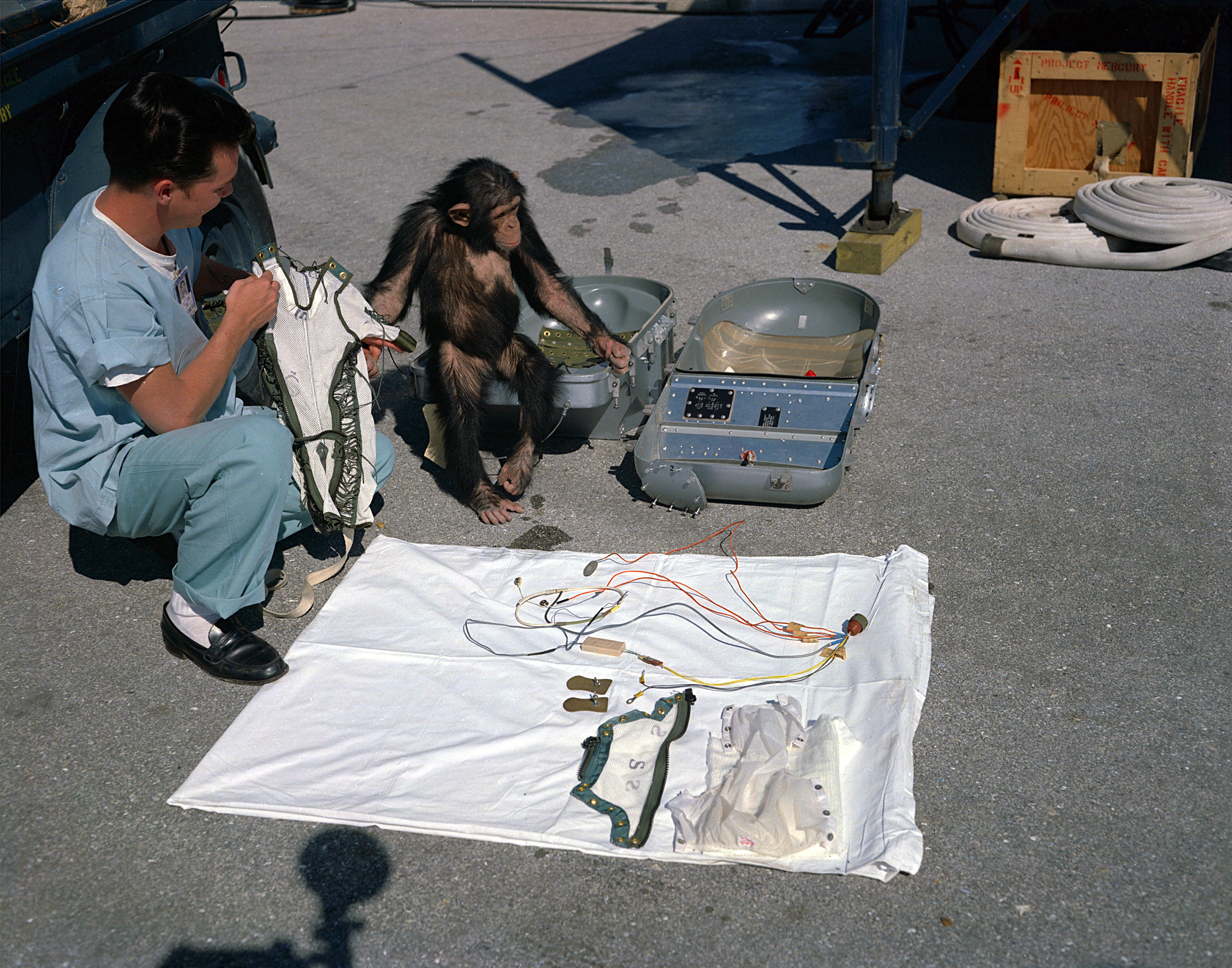 HAM checks out his equipment pre-flight.

This comprehensive site from NASA includes overviews on the Mercury project along with links to photos and details from crewed and uncrewed Mercury missions.

Watch newsreel footage from the time of the MR-2 launch in this Smithsonian Channel documentary, which tells the gripping story of HAM the chimp.

This page is 100% no-nonsense text, but if you're in a reading mood, you'll find a lot of great facts specifically about HAM and the MR-2 mission, including some details about HAM's training and some of the other "astrochimps".